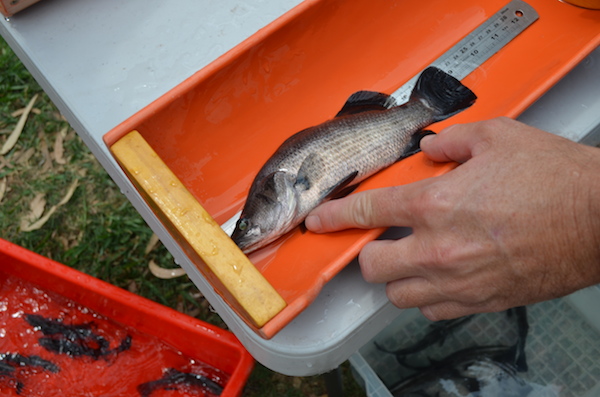 How strong is the urge in Barramundi to take part in spawning and move from freshwater down to the estuary? Well it seems that no matter how long the river is and what obstacles may be in the way the urge means they will take on all challenges. To illustrate that in 2007 there were 848 tagged Barramundi stocked into Lake Theresa near Clermont. In 2010, to everyone’s surprise, one of these fish was recaptured in the Fitzroy estuary some 700km down river. To get there it had to go over the dam wall and a further 6 weirs before it reached the estuary. But much more was to come. From 2010-2013 a total of 44 of those stocked fish were caught in the Fitzroy estuary and beyond. Eight were caught outside the river. To put that into perspective that is a recapture rate of 5.2% compared with the overall recapture rate for Barramundi of 7.1% however all these fish were recaptured over 700km from where tagged. This suggests that many of those stocked fish made it all the way.

The accompanying Google Earth map shows where the fish have been recaptured since 2010.