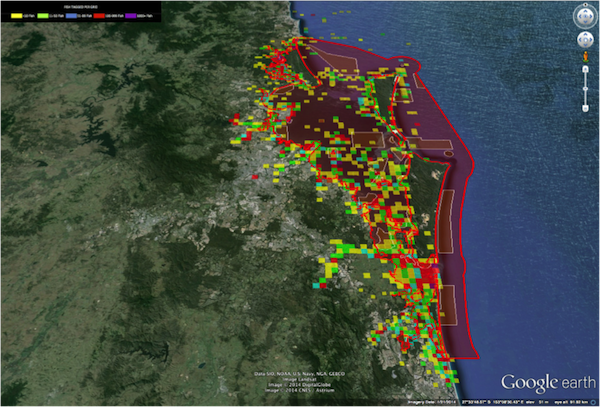 What was the affect of the Moreton Bay Marine Park on recreational fish? Problem is that there is very little hard data to test this. Tagging has been going on since 1985 and provides at least a measure of the affects of the zoning plan on tagging. Based on Suntag map grids where fish have been tagged there were 883 grids in the Marine Park where fish were tagged since 1985. When the park zoning came into effect on 1 March 2009 22 (2.5%) of those grids ended up completely within green zones and a further 68 (7.7%) ended up partially within green zones. The greatest affect on tagging was on 6 grids, one at Scotts Point at Redcliffe and the others at Tripcony Bight in Pumicestone Passage where over 1,000 fish had previously been tagged at these sites. These fell completely within green zones.

Want more details? You can download the latest Suntag report “Moreton Bay Marine Park and Tagging” from http://info-fish.net/suntag/moreton-bay-marine-park-and-tagging/ or wander around the tag grids in the Marine Park.