HomeNewsletter BLUE THREADFIN GET TOGETHER

BLUE THREADFIN GET TOGETHER 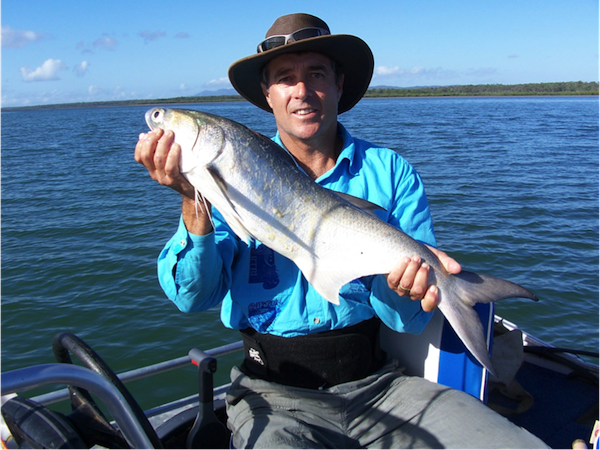 For some time now we have known that Blue Threadfin, those unusual whiskered fish previously known as “Salmon” have spawned at the mouth of the Fitzroy River in Central Queensland. It has taken a long time to get tagging data to support this and an interesting story is evolving. From 1985-2013 there have been 1,363 Blue Threadfin tagged in the Fitzroy River area and 58 (4.3%) recaptures. Blue Threadfin are highly mobile, as anyone that chases them knows they are here today and gone tomorrow. Blues tagged in the river have been recaptured as far north as Cooee Bay (75km) and as far south as the Kolan River (200km) near Bundaberg. Even more interesting though is the number of recaptures of Blues at the mouth of the river. There have now been 15 recaptures there, all in Sep-Oct when it is known that the Blues aggregate there to spawn. These fish have come from up the river (60km), from Gladstone in the south (60km) and Corio Bay in the north (70km). This suggests that the mouth of the river aggregates fish for spawning from the river but also from up and down the coast.